The Basin Street Station visitor center, site of the old Southern Railway Freight Office Building/New Orleans Terminal Company has been located at the corner of Basin and St. Louis Streets since 1904. Basin St. Station is the only remaining of five train station buildings in New Orleans. It was the freight and baggage office building for the Southern railroad. The grand passenger terminal was located at Canal St., between the Saenger Theatre and the Krauss building. Unfortunately, the terminal was destroyed in 1954. The entry of Basin St. Station replicates the architecture of that magnificent structure.

Prior to the 1904 construction of this building, a lumber mill stood on this site located just outside the French Quarter. Throughout the 19th century, the old Carondelet Canal and Basin connected Lake Pontchartrain with the Mississippi River, spurring the development of lumber yards and planning mills, providing building materials for the growing city. The surrounding area also served as a city commons where residents were permitted to graze livestock and gather firewood during the late 18th century and early 19th century. St. Louis Cemetary No. 1 dates from this period and remains across St. Louis Street from Basin Street Station. Today the Basin Street Station is home to the American Routes radio show and also serves as a place where one can locate visitor information, view educational and art exhibits, and arrange for sightseeing tours.

Eighty five years ago the surrounding neighborhood looked drastically different than it does now. During the late 19th and early 20th century railroad service made this part of town the first stop for travelers to New Orleans, and what a stop it was. From 1897 until 1917, the back side of Basin Street was the front of New Orleans famed red light district, Storyville. Grand mansions, all demolished in the 1930’s, lined Basin Street and served as high end bordellos. Smaller, cheaper houses were called “cribs”. The most famous being Lulu White’s Mahogany Hall, which was one of the places jazz pioneer Jelly Roll Morton supplied piano music for the ladies to dance to. “The District”, as it was locally known, was not the birth place of jazz but jazz was played here, mostly by piano players like Jelly Roll Morton, Tony Jackson, Frank Amacker and a few small ensembles. “Spasm Bands”, comprised mostly of kid’s who played in the street for spare change, were common as well as hot stringbands. Emile “Stalebread” Lacoume’s Razzie Dazzie Band and Edward “Kid” Ory’s Woodland Band (Pete Lala’s saloon)were both known to perform in Storyville. There are only a few remaining structures from Storyville including Lulu White’s Saloon at 237 Basin street and Frank Early’s “My Place” Saloon at 1214 Bienville Street. Lulu White was Storyville’s most famous Madame whose plush Mahogany Hall stood to the immediate left of her corner saloon building. Pianist Tony Jackson lived above Frank Early’s “My Place Saloon” and composed the song “Pretty Baby” while residing there.

Storyville, the brainchild of city alderman Sidney Story, was closed by the Navy in 1917 who claimed that the prostitution district posed a hazard to serviceman. Over time, “honky tonks”, dance halls, and the “sporting life” that spread out to the periphery of Storyville became known as the “tango belt”. 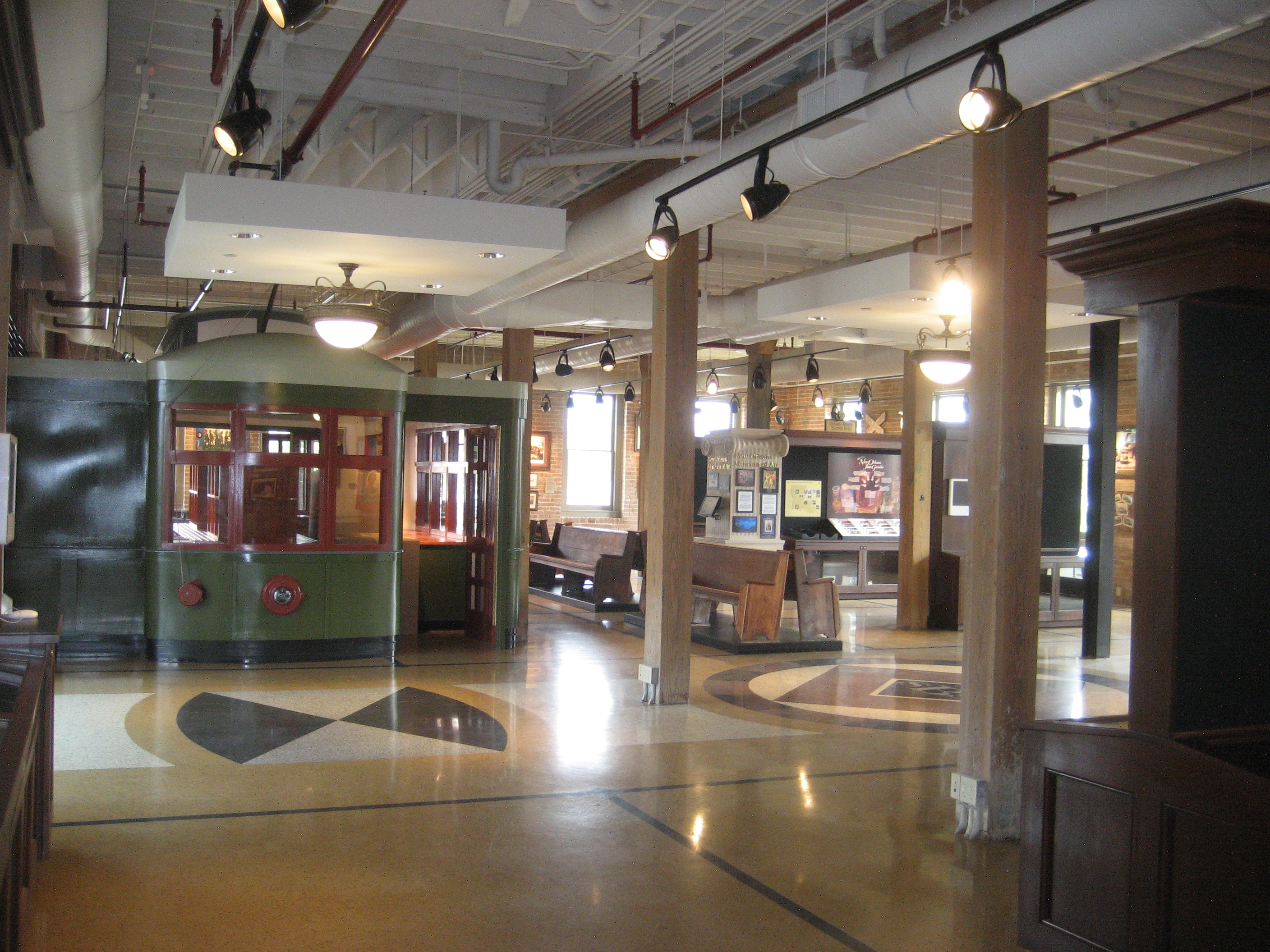 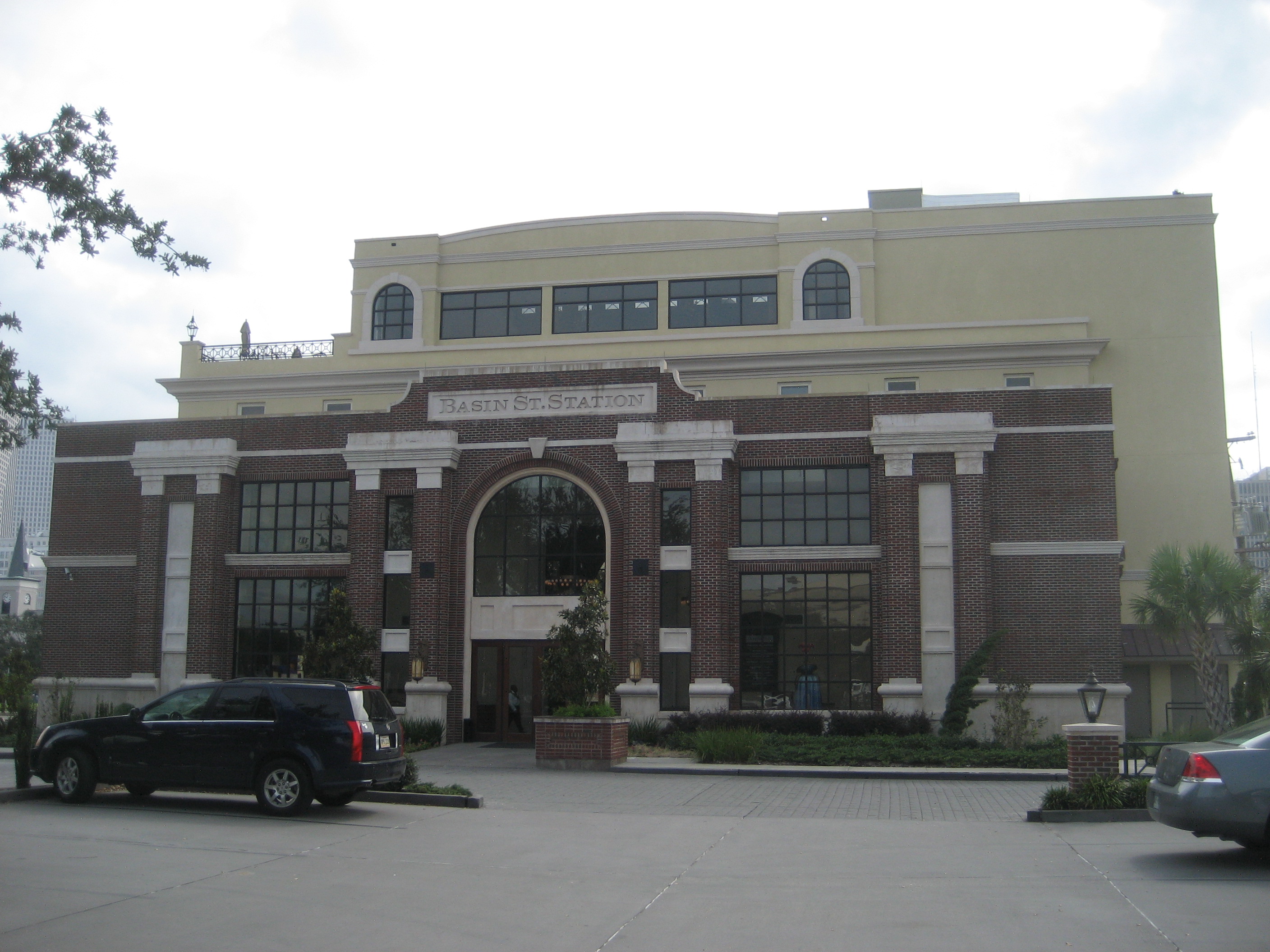 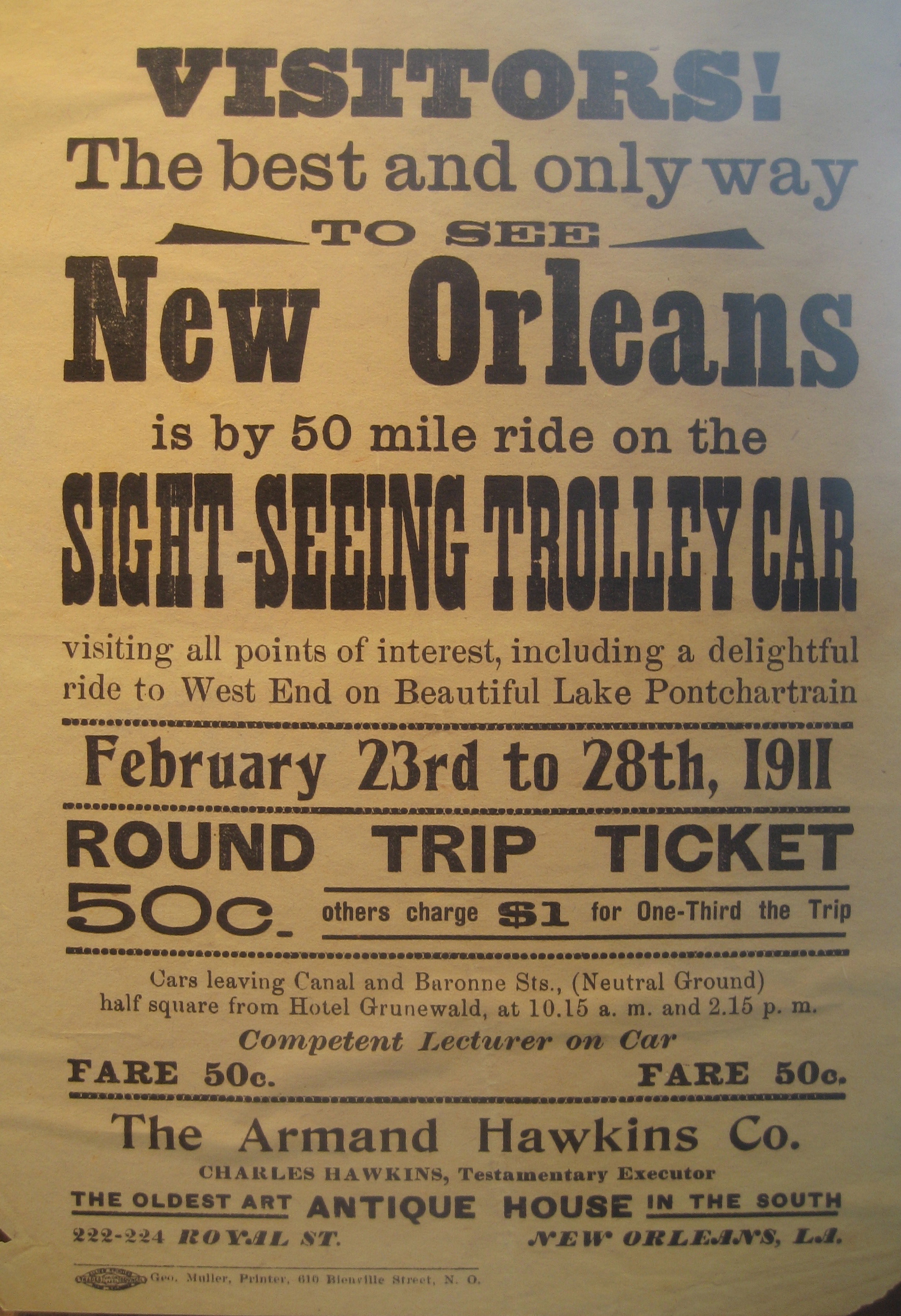 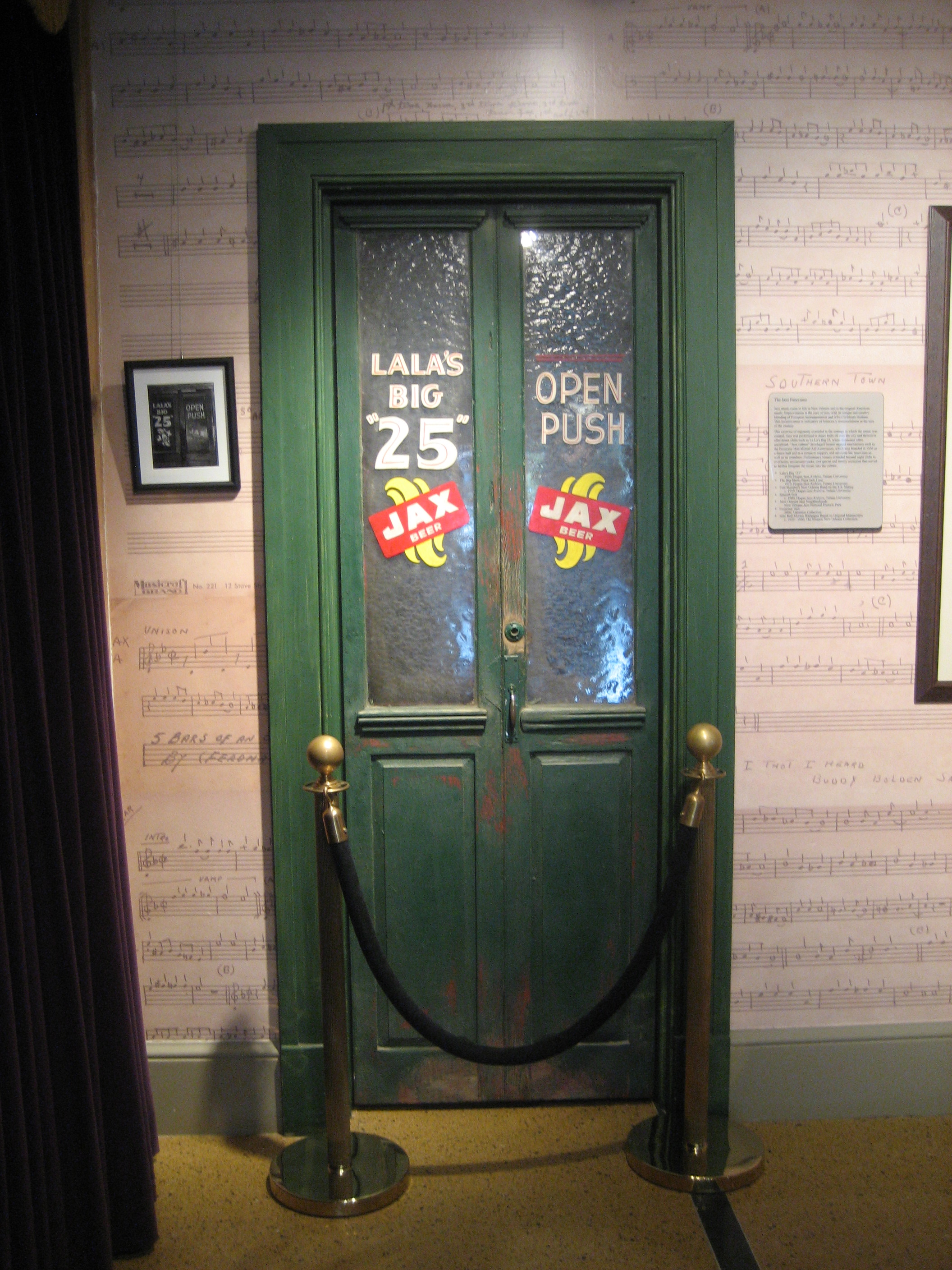 New Orleans: "Basin Street Station" building. Old Southern Railway freight terminal/office has been rennovated, now with visitor information center on ground floor and offices upstairs. Exibit includes these doors from "Lala's Big 25", bar & music venue of a century ago in Storyville, with an old photo of the doors at one side. 16 September 2008. Photo by Infrogmation. GNU Free Documentation License 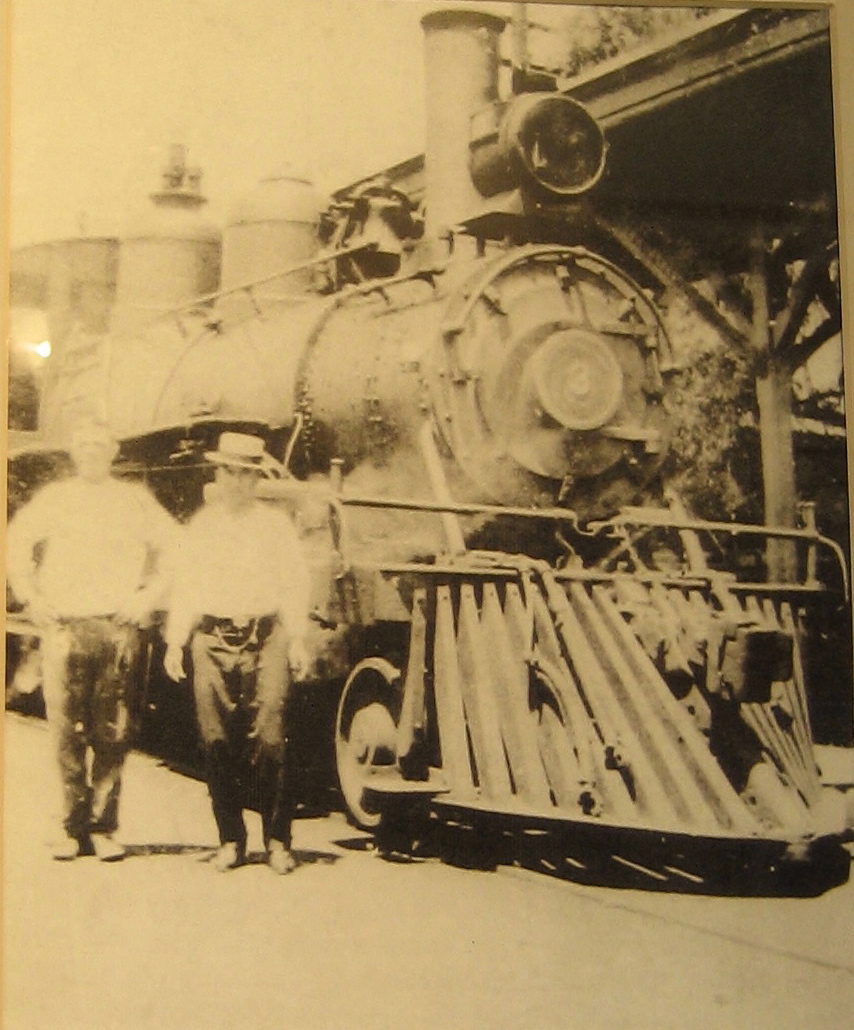